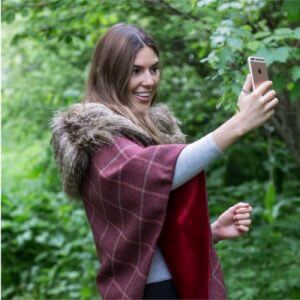 We have a passion about the countryside, after all we are lucky enough to be based in a wonderful area called the Vale of Belvoir (Yes, it is pronounced “Bee-vor”). For many, Tweed is a quintessential product for the countryside. Whether being used for Sport, Formality or Pleasure, it has been a stable base of clothing for hundreds of years. Once only the rich and affluent could afford clothing made in Tweed. However in todays modern society it has become more commonplace and affordable. This has give rise to a wider audience and is no longer just a ‘Countryside Tweed’ product. Whether in the meadows, fields, forest, villages, towns or cities, classic Tweed can be found everywhere.

There are a number of myths around how the name Tweed was discovered. One commonplace myth is that the name is a mistranslation of the word Tweel (derived from the word Twill, the weaving technique used to create the fabric). However some prefer the story that the name arrived in 1831 when a London cloth merchant received a letter from a Hawick Mill, Wm Watson and Son (Dangerfield Mills) about some new Tweels. The merchant in their wisdom misread the handwriting and took the word to be Tweed. He thought that this was the Trade-Name of the fabric as the river Tweed flows through the Scottish Borders and this seemed a natural connection. The fabrics were subsequently advertised as Tweed, and the name remained.

Tweed is found to be a woollen fabric with a soft, open and flexible structure. It is usually found in either a plain weave, twill (this is when a pattern is woven through the Tweed) or herringbone. Colour effects in the material are usually obtained by mixing dyed wool before it is spun. There are many uses for Tweed in clothing, we mainly use them for our Tweed Capes.

The most famous Tweed is Harris Tweed. Harris Tweed is a protected brand and is thought to be the first ever registered British Trademark. Harris Tweed must be woven and spun on the scottish Isle of Harris. However there are many weaving mills who produce Tweed in the UK. These Mills are predominantly found in the North of England. The mills are often steeped with history often through their knowledge and skills which surround the weaving of Tweed. The industrial revolution had a major impact on Mills and fabric contruction.

The number of mills and the size of them is considerably smaller than many years ago as Tweed can be sourced in many places across the world, however it is regarded that Tweed for the UK is the best, and whilst it is more expensive than imported versions, most wearers agree that it is worth paying that little bit more.

Category: Uncategorized
We use cookies on our website to give you the most relevant experience by remembering your preferences and repeat visits. By clicking “Accept All”, you consent to the use of ALL the cookies. However, you may visit "Cookie Settings" to provide a controlled consent. By continuing to use our website without accepting our settings constitutes your acceptance.
Cookie SettingsAccept All
Manage consent

This website uses cookies to improve your experience while you navigate through the website. Out of these, the cookies that are categorized as necessary are stored on your browser as they are essential for the working of basic functionalities of the website. We also use third-party cookies that help us analyze and understand how you use this website. These cookies will be stored in your browser only with your consent. You also have the option to opt-out of these cookies. But opting out of some of these cookies may affect your browsing experience.
Necessary Always Enabled
Necessary cookies are absolutely essential for the website to function properly. These cookies ensure basic functionalities and security features of the website, anonymously.
Functional
Functional cookies help to perform certain functionalities like sharing the content of the website on social media platforms, collect feedbacks, and other third-party features.
Performance
Performance cookies are used to understand and analyze the key performance indexes of the website which helps in delivering a better user experience for the visitors.
Analytics
Analytical cookies are used to understand how visitors interact with the website. These cookies help provide information on metrics the number of visitors, bounce rate, traffic source, etc.
Advertisement
Advertisement cookies are used to provide visitors with relevant ads and marketing campaigns. These cookies track visitors across websites and collect information to provide customized ads.
Others
Other uncategorized cookies are those that are being analyzed and have not been classified into a category as yet.
SAVE & ACCEPT
Powered by